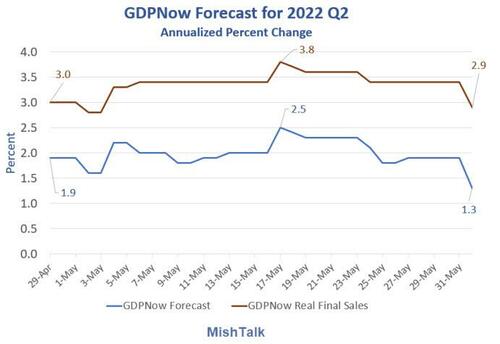 GDP estimates are plunging but are still too high. A recession is on the near horizon.

GDPNow Data from the Atlanta Fed, Chart by Mish

The GDPNow Forecast was at 2.5 percent on the May 17 retail sales report. It’s now 1.3 percent and falling fast.

This snip is from June 1.

The GDPNow model estimate for real GDP growth (seasonally adjusted annual rate) in the second quarter of 2022 is 1.3 percent on June 1, down from 1.9 percent on May 27. After this morning’s Manufacturing ISM Report On Business from the Institute for Supply Management, and this morning’s construction spending report from the US Census Bureau, the nowcasts of second-quarter real personal consumption expenditures growth and real gross private domestic investment growth declined from 4.7 percent and -6.4 percent, respectively, to 4.4 percent and -8.2 percent, respectively.

1.3 percent is below the stall rate. However, Real Final Sales is the number to watch.

That’s the true bottom line number for the economy. The rest is inventory adjustment which nets to zero over time.

The GDPNow estimate for Real Final Sales is a very respectable 2.9 percent.

Why the Recession Call?

On April 28, I reported GDP Declines 1.4% in First Quarter of 2022 Sounding Recession Bells

Economists missed the mark badly as GDP shrunk along with real final sales.

Real final sales was negative in the first quarter and I expect a repeat in the second quarter because I do not believe retail sales will hold up.

On May 17, I noted Retail Sales Easily Beat Expectations, US Treasury Yields Jump in Response

Continue reading Expect A Deep Recession To Start This Quarter Or Early Third Quarter at ZeroHedge.