CHINA is convinced it now needs to hit America “hard and early ” in a surprise Pearl Harbor-style attack to invade Taiwan, a leading expert has warned.

Oriana Skylar Mastro, a fellow at Stanford University and a former China analyst at the Pentagon, told The Sun Online how Beijing increasingly views an invasion of the island as inseparable from a war with the US.

It comes as massive Chinese military exercises are currently taking place off Taiwan following the visit by US politician Nancy Pelosi.

She is the third in line to the presidency and the most senior US figure to visit the self-governing island in decades.

Mastro told The Sun Online these types of blockade war games are set to become more commonplace as the threat of war increasingly looms.

She explained that Beijing now believes it also has to fight the US if it is to fulfil its long cherished goal of invading Taiwan and “reuniting” with the mainland. 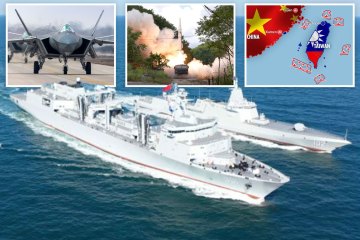 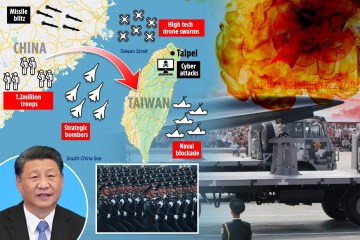 Mastro believes the most likely way such a conflict would play out is with a Pearl Harbor-style attack on US forces in the region.

It would be designed to try and knock out US forces so they could not react to stop China gaining a foothold in Taiwan, which it regards as its territory.

The strategic gamble would be an attempt to stall a wider war – just as Japan hoped when they attacked Pearl Harbor in 1941, drawing the US into World War Two.

It would be one of the chilling factors China would have to weigh up if decides the only way to “reunify” with Taiwan is an invasion.

Most read in US News

“It’s about hitting hard and early so we can’t get boots on the island before the United States can launch a response,” Mastro told The Sun Online.

She went on: “My argument is that the more people like Pelosi try to make the US commitment clear, then the more certain the Chinese are of our commitment – and the more likely a Pearl Harbor-style attack is.”

Washington has always stopped short of outright backing for Taiwan in the event of war with China or supported independence for the island.

Instead it has maintained a policy of so-called “strategic ambiguity” aimed at not provoking Beijing and has said backs the idea of ‘One China’.

But in recently Joe Biden broke with convention an responded “yes” when asked if the US would come to Taiwan’s aid if the island was attacked by China.

Beijing views any engagement between Washington and Taipei as a US endorsement of the island’s independence.

Pelosi is a vocal supporter of Taiwan trip to the island earlier this week she was the most senior US politician to visit Taiwan in a quarter of a century, which infuriated China.

During her trip the Speaker of the House of Representatives voiced America’s support for Taiwan and seemed to have called Beijing’s bluff after it hinted it might shoot down her plane.

Beijing has surrounded Taiwan with warplanes and warships as it announced six massive military exercises minutes after Pelosi landed on Tuesday.

Mastro is one of the world’s leading authorities on the Chinese military and its thinking – being an award-winning academic with positions at Stanford University and the American Enterprise Institute.

Earlier this year, she suggested such an attack could see America lose a war to China in a week as it struggled to get its forces in place to prevent an invasion of Taiwan.

She has even been speaking to Chinese officials amid the crisis as the world’s eyes are now focused on Taiwan.

Mastro told The Sun Online that they told her they will use the current crisis to ramp up the pressure on Taiwan and make life difficult for America.

“I met with some Chinese government officials this morning and they communicated to me that the status quo has been broken,” she said.

“Now they have an opportunity to build a new status quo and that’s going to be one more beneficial for them in which they’re present and operating because this exacerbates the US problem of early warning.

“There will be large scale mobilisations and exercises that are basically combat rehearsals.

“If it becomes routine for China to be engaging in mass mobilisations then it’s harder for the United States to know if it’s a blockade of Taiwan or just and exercise.”

Japan’s assault on Pearl Harbor on December 7, 1941, was a surprise attack designed to stop the US from intervening in the empire’s expansion in Asia.

More than 350 fighters and bombers blitzed the military base in Hawaii – sinking four battleships, destroying 188 aircraft and killing 2,335 servicemen.

The next day the US entered World War Two.

Japan, South Korea and the island of Guam are just some of the locations which serve the US army, navy and air force near China and Taiwan.

And the main source of power for Washington in the region is the mighty Seventh Fleet.

The fleet deploys between 50 to 70 warships, including aircraft carriers, submarines, destroyers, cruisers and assault ships.

Some 27,000 sailors and marines are service with the fleet – which also has around 150 aircraft.

And at the core of the fleet is the Fifth Carrier Strike Group, currently headed by USS Ronald Reagan – which is currently operating close to Taiwan.

Taiwan is feared to be a major flashpoint between the Washington and Beijing – with a potentially invasion potentially forcing the US to either abandon the island or face full scale war with China.

Mastro is not the only expert to have suggest that the US could face another ‘Pearl Harbor’ over Taiwan.

Brands and Beckley warn the “most worrying” scenario would see Beijing attempt to launch a “surprise missile attack” on American forces in Asia.

Chinese military doctrine demands that they attempt to “paralyse the enemy in one stroke” – and they warn “by the time the [US] was ready to fight, the war might effectively be over”.

The experts, who penned the chapter “Getting Ready for a Long War” in the book for the American Enterprise Institute, argue the US is preparing for the “wrong kind of war” over Taiwan.

Both sides are readying their militaries for a “splendid little war”.

But they warn Chinese and US military leaders will instead end up getting a long, grinding conflict with an overt risk of a nuclear exchange.

Drawing up a worst case scenario for day one of the war, Brands and Beckley describe how Beijing will seek to blunt any response by the US.

The massive assault would then be followed by cyberattacks and anti-satellite operations to try sow chaos and stop any effective response by Taiwan and the US.

They go on: “And the PLA would race through the window of opportunity, staging amphibious and airborne assaults that would overwhelm Taiwanese resistance.”

“By the time the United States was ready to fight, the war might effectively be over.”

Brands and Beckley wrote that the US is currently actively planning against this scenario – seeking to “harden and disperse” the US military presence in Asia.

Such a pre-emptive strike would only serve to galvanise the US determination to hit back hard against China.

“The fact that such a war would probably begin with a Pearl Harbor–style missile attack on US bases would make it even harder for an outraged American populace and its leaders to accept a quick defeat,” they wrote.

Chinese leader Xi Jinping has always vowed to “reunify” with the island – and it’s feared the new drills are a rehearsal for invasion.

Enormous military exercises have been launched just 12 miles from the island, with 100 warplanes, missiles being fired, and tanks gathering on beaches.

And state controlled media has been turning up the heat on the rhetoric, referring to the drills as “rehearsals for the reunification operation”.

Chinese nationalists fled to Taiwan after the Communists won the civil war on the mainland in 1949 – and the island has remained self-governing ever since.

Beijing has always aggressively insisted that Taiwan belongs to them by right – and have pledged to reclaim the island by 2050.