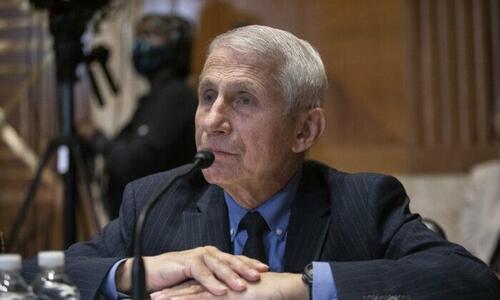 Authored by Eva Fu via The Epoch Times (emphasis ours),

Dr. Anthony Fauci said he was unable to commit to stop federal funding from going to Chinese scientific research, despite the U.S. intelligence community assessing the regime as America’s top adversary.

Dr. Anthony Fauci, Director of the National Institute of Allergy and Infectious Diseases testifies during a Senate Appropriations Subcommittee on Labor, Health and Human Services, Education, and Related Agencies hearing on Capitol Hill in Washington, on May 17, 2022. (Anna Rose Layden-Pool/Getty Images)

Fauci, the head of the National Institute of Allergy and Infectious Diseases (NIAID), made the remarks while appearing virtually at the Health, Education, Labor & Pensions Committee hearing on June 16, during an exchange with Sen. Roger Marshall (R-Kansas).

“The NIH is still funding research in China, at least $8 million since 2020. In the Intelligence Community’s 2022 Annual Threat Assessment, the Chinese Communist Party is presented as one of the top threats to the United States, along with Russia, Iran, Syria, and North Korea. To my knowledge, only China is receiving U.S. research dollars,” said the senator during the hearing. “When will you as director of NIAID stop funding research in China?”

Although this amount doesn’t capture dollars later funneled to a Chinese institution through a U.S.-based organization, such as New York-based EcoHealth Alliance, which had partnered with the Wuhan Institute of Virology to perform coronavirus-related experiments

The Democrats’ Trump Obsession Will Do Them In
The American Spectator June 19, 2022