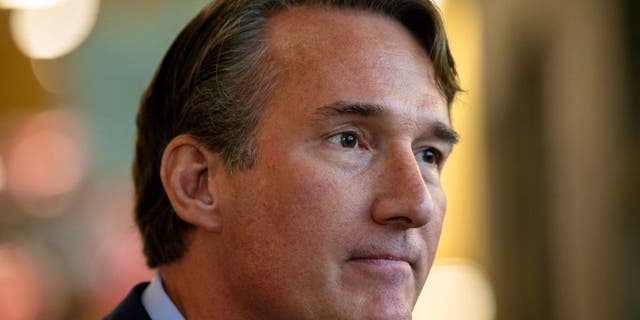 The Republican governor of Virginia delivering a speech Saturday is not remarkable.

Except, he’s making it in Nebraska.

Glenn Youngkin’s unusual trip to the Cornhusker State is beginning to draw attention as rumors swirl of a potential 2024 GOP presidential bid.

Youngkin, who won an upset victory last year in the Old Dominion, is traveling to Nebraska this weekend to rally the party faithful at the state’s GOP convention.

Virginia Gov. Glenn Youngkin heads a roundtable meeting with parents and two of his secretaries at a Safeway grocery store in Alexandria, Va., Feb. 3, 2022.
(Robb Hill for The Washington Post via Getty Images)

Political strategists say the trip has sparked speculation given Nebraska’s proximity and overlapping media market with Iowa, the first state to hold a contest in the presidential primaries.

“Going to Nebraska is as close as going to Iowa without actually stepping foot in the state,” said Brendan Steinhauser, a Republican consultant who has run several high-profile campaigns. “It’s hard to know for sure his motivation, but it seems like he’s at least exploring or heavily flirting with the idea of a run.”

Youngkin’s political team denies that there is any self-serving political reason for the trip. They say his keynote address at the convention is nothing more than a favor for Nebraska Gov. Pete Ricketts, who also serves as chairman of the Republican Governors Association.

The timing of the visit is serendipitous, though, as it coincides with a bevy of positive media attention and high-profile actions by Youngkin.

Last month, the governor signed his first two-year state budget into law, delivering on a campaign promise to cut taxes while plowing more money into education than any administration in history.

The budget provided Youngkin with big success only seven months into his term. It also left the governor with some time on his hands since Virginia’s legislature will only meet for 30 days next year to focus on non-budgetary issues. 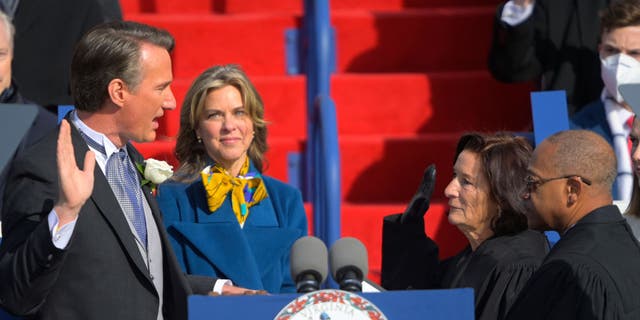 Glenn Youngkin is sworn in as Virginia’s 74th governor with wife Suzanne at his side on the front steps of the Virginia State Capitol Jan. 15, 2022, in Richmond, Va.
(John McDonnell/The Washington Post via Getty Images)

Youngkin, who cannot run for re-election, seems particularly ambitious to make use of the downtime.

The governor has started both a state and national political action committee to help elect candidates up and down the ballot in November. One of those PACs has already raised more than $2.6 million, thanks to Youngkin’s judicious courting of national megadonors.

Youngkin is also planning to traverse Virginia and the rest of the country this cycle to campaign for Republicans.

“It will be worth keeping a closer eye on Youngkin as he begins to lift his national profile,” Washington Post columnist Karen Tumulty wrote. “Republicans have won the popular vote in only one presidential election since 1988. He may not be the guy to end that drought. But it is past time for them to find someone who is.”

GOP strategists say the governor could be a contender if he chooses to get involved in the race. They noted that Youngkin ran what can be described as a national race last year in a state that many had written off as solidly Democratic.

“He’s got an interesting message that could resonate with voters, especially those looking for a fresh face,” said Steinhauser. “He could be an alternative to Trump, but also someone more acceptable to the majority Republicans because he isn’t seen as a Never Trumper.” 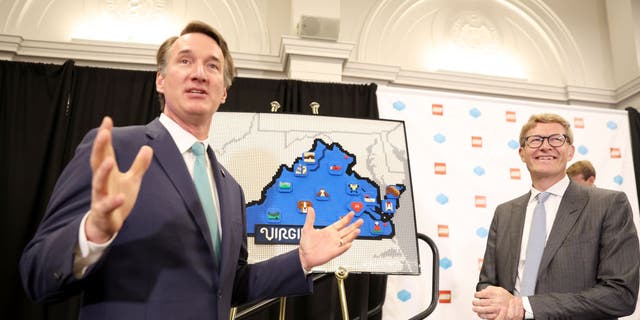 Virginia Gov. Glenn Youngkin, foreground, and Lego Group CEO Niels B. Christiansen speak during a press event during which The LEGO Group announced plans to build a $1 billion, carbon-neutral factory in Virginia.
(Tasos Katopodis/Getty Images  for The LEGO Group )

It remains to be seen whether that lane will be big enough in 2024, especially if Trump decides to run again. Regardless, most say the presidential contest will be broader than most people think.

“The race is fairly open, especially here in Iowa,” said Bob Vander Plaats, who runs Iowa’s powerful and socially conservative group, The Family Leader. “There’s a lot of avid Trump supporters and people thankful for what the former president did, but there are also folks who are ready to turn the page.”

Vander Plaats argued that although Trump was the favorite, others could break out, including Florida Gov. Ron DeSantis. He added that, although Youngkin was talented, he was still largely unknown in Iowa.

“This Nebraska trip might get him in the news a little bit over here,” he said. “But it’s also probably going to raise questions on why a freshly elected governor is out on the trail and not back home leading. That’s something he’ll have to confront if he chooses to make the race.”