A Quarter Of San Francisco’s Office Space Is Empty 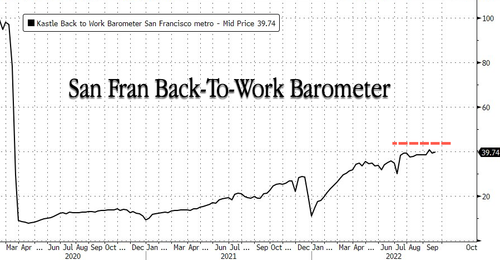 A Quarter Of San Francisco’s Office Space Is Empty

San Francisco’s office vacancy rate has risen to a record 25.5% at the end of Sept., up from 20% a year earlier, according to Bloomberg, citing new data from real estate brokerage CBRE Group Inc. The amount of vacant office space surpassed levels after both the 2008 Great Recession and the dot-com bust.

CBRE said that the city’s office vacancy rate was about 4% at the virus pandemic’s start. By September 2021, the rate was 20% and has since increased to 25.5%.

Workers have been slow to return to the city’s downtown, with weekly office utilization less than 40% of the pre-pandemic average, according to security company Kastle Systems. Office values in the San Francisco area have tumbled almost 40% on a price-per-square-foot basis from a high in December 2020, according to MSCI Real Assets. — Bloomberg

The data suggests several forces driving this phenomenon, including remote work and the growing appeal of tech companies moving operations beyond San Francisco, even out of state.

Cities like Austin, Texas, and Miami, Florida, have been luring tech companies from the Bay Area with lower taxes, affordable housing, higher-quality public schools, and, of course, less crime.

Perhaps the Bay Area’s social-economic implosion is enough evidence that the trend to exit the area for safer areas is long-term, well, at least as long as progressives continue ruining the city through social justice reforms that have backfired.

Some Bay Area neighborhoods and street corners are overrun with homeless people and Fentanyl addicts, it’s tough for a tech company to attract new

Continue reading A Quarter Of San Francisco's Office Space Is Empty at ZeroHedge.