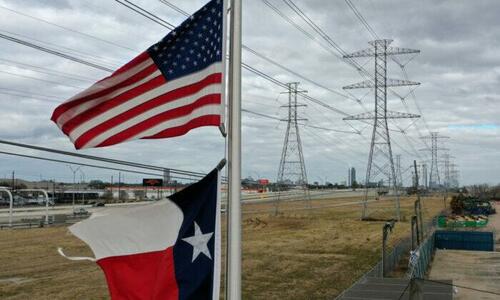 Authored by Naveen Athrappully via The Epoch Times (emphasis ours),

Tax revenue in Texas grew by a record 25.6 percent for the 2022 fiscal year through August, according to the latest tax collection data released by the state Comptroller of Public Accounts, Glenn Hegar.

All-funds tax collection for fiscal year 2022 until August came in at $77.2 billion, beating projections made in the Certification Revenue Estimate by nearly $841 million, the data show.

Since 1988, the growth in the all-funds tax collections has exceeded the prior fiscal year by double digits just five times. And even then, the increases were only in the range of 10 to 13 percent. The 26 percent increase in fiscal 2022 until August is almost double the largest increase seen since 1988.

In a Sept. 1 press release, Hegar credited the higher sales tax collections to economic growth and inflation. As demand remains strong, both individuals and businesses continue to pay elevated prices for goods, he pointed out.

State sales tax receipts tend to spike during periods of high inflation. The 12-month Consumer Price Index (CPI), a measure of annual inflation, has remained above 7 percent for every single month in 2022, hitting a peak of 9.1 percent in June.

The CPI was only at 1.4 percent in January 2021 when President Joe Biden took office. In a recently published survey conducted by The Dallas Morning News and the University of Texas at Tyler, 48 percent of respondents blamed Biden and Congress for inflation and the rising cost of living.

Texas does not have a corporate income tax or state