Where Real Wages Are Falling Most Sharply 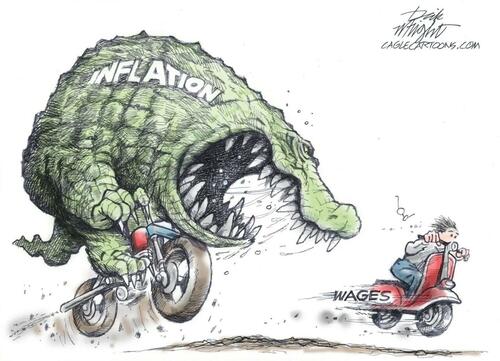 Where Real Wages Are Falling Most Sharply

Wages are rising, but they are not keeping up with inflation.

Statista’s Martin Armstrong notes that while pay negotiations may have resulted in wage increases in several sectors this year, overall increases will remain below the rise in consumer prices in many countries, as confirmed by data released by the OECD in its macroeconomic report.

The war in Ukraine has significantly increased prices, particularly for energy, adding to central bank largesse-inspired inflationary pressures at a time when the cost of living was already rising rapidly around the world. As a result, global financial conditions have tightened substantially this year and the outlook for labor markets remains uncertain. In most OECD countries, average wage growth has been slower than inflation, reducing household purchasing power despite government measures to mitigate the impact of soaring food and energy prices.

As Statista’s infographic shows, Switzerland is for the time being one of the few economies analyzed that seems to have been spared.

You will find more infographics at Statista

In the United States, the average decline in real wages for the entire population – across all sectors and income levels – was just over 2 percent year-on-year in the third quarter of 2022.

In Europe, Germany and Spain saw even more pronounced declines in purchasing power, with real incomes falling by just over 4 percent and 5 percent, respectively, nationwide.

Several factors explain the differences between countries, such as differences in exposure to inflation, but also in social protection measures.

Continue reading Where Real Wages Are Falling Most Sharply at ZeroHedge.

Previous Article
Almost 300 Obama Admin Emails on Hunter Biden Relationship With Burisma Set to Be Released
Next Article
Why Has the FBI Become So Political?

Why Has the FBI Become So Political?
The American Spectator December 16, 2022