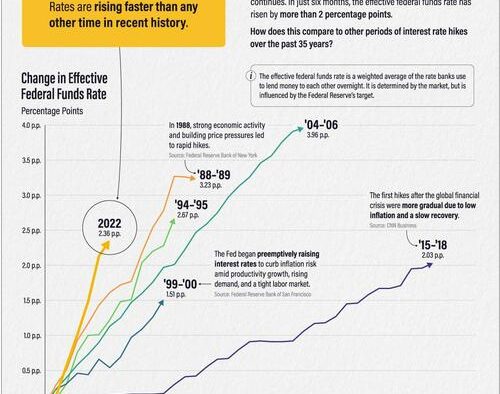 As U.S. inflation remains at multi-decade highs, the Federal Reserve has been aggressive with its interest rate hikes. In fact, rates have risen more than two percentage points in just six months.

In this graphic – which was inspired by a chart from Chartr – Visual Capitalist’s Janna Ross and Sabrina Lam compare the speed and severity of the current interest rate hikes to other periods of monetary tightening over the past 35 years. 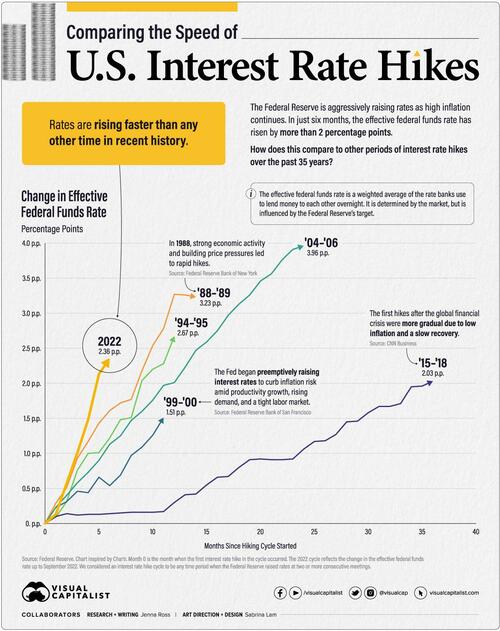 We used the effective federal funds rate (EFFR), which measures the weighted average of the rates that banks use to lend to each other overnight. It is determined by the market but influenced by the Fed’s target range. We considered the starting point for each cycle to be the EFFR during the month when the first rate hike took place.

Here is the duration and severity of each interest rate hike cycle since 1988.

* We considered a rate hike cycle to be any time period when the Federal Reserve raised rates at two or more consecutive meetings. The 2022 rate hike cycle is ongoing with data as of September 2022.

On the other hand, the most severe interest rate hikes occurred in the ‘04 – ‘06 cycle when the EFFR climbed by almost four percentage points. It took much longer to reach this level, however, with the hikes taking place over two years.

Continue reading Comparing The Speed Of US Interest Rate Hikes (1988-2022) at ZeroHedge.

Previous Article
Are millennials finally ready to have babies?
Next Article
Jill Biden Gets Mercilessly Booed at Eagles Game During Coin Toss