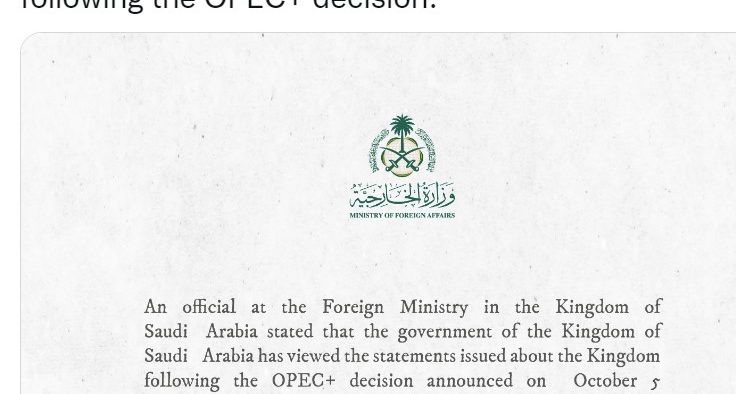 We haven’t had a 5QT around here for a while, so let’s knock this out and get your weekend started.

There has been some debate back and forth about whether the Republican majority-to-be in the House of Representatives ought to move toward impeaching Joe Biden after Kevin McCarthy wrests the Speaker’s gavel out of Nancy Pelosi’s vodka-soaked fingers in the first week of January. This column has taken the position that while a Biden impeachment is a debatable thing, the bills on the Biden cabinet shouldn’t be up for debate; every one of them ought to be filed and acted upon no later than Jan. 10.

But with this almost-unfathomable business of Biden’s failing attempts to jawbone the Saudis and the rest of OPEC to boost, or at least maintain, oil production through the midterm elections, he’s got to get a healthy serving of Peach Mints, too.

Good God, this is amazing.

You already know Biden has done everything he could do to hamstring domestic energy production. You already know that by restricting domestic supply he’s had gas prices shoot skyward for most of his time in office. And you know that his efforts to combat that have included begging all of America’s enemies who have oil to make more of it and sell it to us rather than to restart our own production, not to mention draining out and selling off a giant quantity of our Strategic Petroleum Reserve (SPR), which is in place to serve our military in the case of a war (like the one Team Biden is busily attempting to escalate in Ukraine).

But the OPEC cartel rebuffed Biden, embarrassingly, and said they’d cut production rather than raise it. Gas prices went further skyward, even with Biden dumping out more of the SPR.

Now you’re caught up to this week, when it comes out that Biden then went begging and cajoling to the Saudis, whom he’d called a pariah regime, that if they were going to cut production they at least shouldn’t do it until after the midterms.

Now that they’ve spat in his face, there is this from Head Senatorial Minion Chuck Schumer:

Momentum is building in Congress in support of legislation that would take on the OPEC+ group of oil-producing nations that just announced cuts in production likely to help Russia and raise prices in the United States.

Senate Majority Leader Charles Schumer (D-N.Y.) recently floated using the legislation, known as “NOPEC,” as one way to respond to the group, which includes Saudi Arabia and Russia.

Some lawmakers on both sides of the aisle have gone even further, saying that the decision by the Saudi-led group to reduce production by 2 million barrels a day is a reason to significantly shift relations with Riyadh.

The White House has not explicitly backed the bill, but said following the production cut announcement that it would “consult with Congress on additional tools and authorities to reduce OPEC’s control over energy prices.”

On Tuesday, the White House told reporters that President Biden believes the U.S. should review the Saudi relationship given the production cuts….

The NOPEC legislation would enable the Justice Department to bring lawsuits against the OPEC+ countries and their state-owned oil companies under U.S. antitrust laws.

Durbin has called for its passage in the lame-duck session after the November midterm elections.

Schumer has said he was “looking at” the bill but stopped short of calling for its passage.

“We are looking at all the legislative tools to best deal with this appalling and deeply cynical action, including the NOPEC bill,” he said in a recent statement.

It’s actually a bipartisan bill, and the problem isn’t that it’s a wholly awful idea. It’s that OPEC has nothing to do with our energy shortage and inflationary catastrophe. Biden could have gotten out of the way and allowed domestic oil producers to make OPEC irrelevant to the American economy, and for almost two years he’s steadfastly refused to.

All because his cabal can’t stand the deliberately self-inflicted pain at the pump with the midterms approaching?

The naked politics of this, when Team Biden had spent time touting high gas prices as a means of fomenting a transition to electric cars and whatever other Green New Deal fantasies it wants to wrap the American people around, is just too much.

Impeach the m-f-er. Isn’t that how it goes, Rashida?

There isn’t a whole lot I need to add to Tucker Carlson’s perfect take on this “controversy” over the NBC News interview of the Democrats’ addled Pennsylvania Senate candidate John Fetterman, so I’ll turn it over to him:

Fetterman is clearly impaired and clearly unsuited to the seat he’s running for. That’s blatantly obvious to anyone making a good-faith, objective judgment of the situation. And it’s highly problematic that the Democrats are willing to go to the mat for him even now, when it’s obvious he can’t even do an interview without having his words scripted for him on a teleprompter.

As Carlson says, though, this is the way the exploiters on the left work. They proved it with Greta Thunberg (or, as I like to call her, Scoldilocks), and they’ve proven it repeatedly with Biden. They bring out people physically and mentally impaired and incapable of doing the job they advertise themselves ready for, and then when called on the spectacle they play the civil-rights hustle and call you an “ageist” or an “ableist.”

No, dudes, that guy can’t do the job. He’s not deaf or in a wheelchair, he’s all but braindead. We’re not the bad guys for pointing that out; you’re the bad guys for trotting him out there and insisting that your drone voters turn out for him.

He won’t do it, but Mitch McConnell ought to put out the word that if there’s a GOP majority in the Senate they’d subject Fetterman to a cognitive test before seating him in the next Congress. Let the people who threw a fit over NBC News’ interview with him go batty over that, and watch the public cock their heads and go “Huh?” over the question of it being a partisan attack that the Senate would want to ensure its members are, in fact, fully sentient beings.

Especially given the Pennsylvania Supreme Court’s illegal adoption of institutionalized voter fraud in the November election.

I mentioned this in my last column, the one about how awful the sucktastic and race-obsessed Karine Jean-Pierre really is, but there’s a common thread running through most of the current political news, and it’s something that can be summed up in an old scene from the classic Al Pacino courtroom drama And Justice For All. Pacino’s law partner, played by Jeffrey Tambor, has a nervous breakdown and ends up in a corridor of the courthouse throwing plates at passersby, and it’s up to Pacino and one of the court’s judges, played by Jack Warden, to rush him and take him down.

Everything you see is Team Biden and the Democrats, insane Jeffrey Tambor–style, desperately throwing plates to keep from being subdued while a horrified public looks on.

Which brings us to Thursday’s pop-up media frenzy over the Jan. 6 Committee (did you know that was still a thing?) rustling up a unanimous vote to subpoena President Trump for its next kangaroo hearing.

But of course this won’t actually come to pass, because Trump will challenge the subpoena in court and it’ll drag out until after McCarthy becomes the Speaker and either disbands the Jan. 6 Committee altogether or cleans out its membership and starts anew with Jim Jordan or Jim Banks chairing it and turning its attention to Pelosi’s lack of security at the Capitol, the presence of FBI informants serving as agents provocateur that day, and even the conditions at that D.C. federal prison endured by protesters guilty of little worse than trespassing who have been locked up without bail or trial for almost two years now.

So why the circus over a pointless subpoena? Because Pelosi and the other plate-throwing Jeffrey Tambors with Ds next to their names need something to mobilize their depressed voters, and offering the shiny object of Trump testifying or being hauled off to jail for contempt of Congress is one more piece of flying flatware.

Talk about contempt — they’ve got it for the American public. But of course that’s nothing new.

You’ve heard about this, right? Ho, who’s a superstar appellate judge on the Fifth Circuit and really, really ought to be on the short list for the next Republican Supreme Court appointee, is retaliating against Yale University’s Law School for letting the freaks cancel people on campus. He’s saying that until Yale begins respecting free speech again he’s done considering Yale grads for clerkships.

And boy, the Ivy League mob doesn’t like that.

But Ho isn’t alone, and he’s now got a dozen or so others who are joining him. What’s so funny is most of them are doing it anonymously, and that’s gorgeous — now you’ll never know whether you’ll get blackballed as a Yalie applying for a clerkship. By doing it anonymously these guys are illustrating the effect of the cancel culture.

Frankly, while Ho’s point about campus cancellations is spot on, his move doesn’t go far enough. But the whole thing raises a couple of points which are especially salient right now: first, we are a completely over-credentialed society, and the elite colleges and universities have pumped up this idea of prestige and status as part of the unhealthy higher-ed bubble they’ve built, which will apparently cost ordinary Americans some half-trillion dollars as a down payment to relieve.

And second, everything about America is far too centralized. Yale Law School might indeed be excellent, but it’s ridiculous to think Yalies are the only ones competent to clerk for federal appellate or Supreme Court justices. That eight of the nine current Supremes went to either Harvard or Yale (Amy Coney Barrett is the lone exception; she’s a Notre Dame alum) is horrendous, and Americans ought to be outraged by it.

James Ho, by the way, went to the University of Chicago’s law school. Sounds good to your author.

5. Time for something else. How about this?

Previous Article
Biden claims son Beau died in Iraq during speech in Colorado
Next Article
Are millennials finally ready to have babies?

Are millennials finally ready to have babies?
Washington Examiner October 13, 2022