Superbubble’s Final Act? Or Is This Time Different? 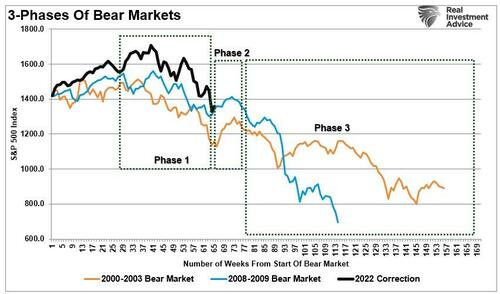 Superbubble’s Final Act? Or Is This Time Different?

Authored by Lance Roberts via The Epoch Times,

Is this the “Superbubble’s Final Act?” Such was a fascinating piece of commentary recently from Jeremy Grantham, famed investor and co-founder of GMO, who wrote:

“Only a few market events in an investor’s career matter; among the most important of all are superbubbles. These superbubbles are events unlike any others: while there are only a few in history for investors to study, they have clear features in common.

“One of those features is the bear market rally after the initial derating stage of the decline, but before the economy has begun to deteriorate, as it always has when superbubbles burst. In all three previous cases, the market recovered over half the initial losses, luring unwary investors back just in time for the market to turn down again, only more viciously, and the economy to weaken. This summer’s rally has so far perfectly fit the pattern.”

The chart below compares the 2000 “dot.com” and 2008–09 “financial crisis” superbubbles. To Grantham’s point, there are indeed some very concerning similarities.

What Grantham is discussing is also a reflection of one of Bob Farrell’s 10 investment rules. (Farrell was former head of research at Merrill Lynch.) His rule number eight states the following:

“Bear markets have three stages—sharp down, reflexive rebound, and a drawn-out fundamental downtrend.”

As noted, the year 2022 started with a sharp and swift decline lasting well into midyear. With extremely bearish sentiment, it was no surprise that July and August saw an oversold bounce that retraced a portion of that decline. However, with that retracement now behind us, the concern is

Continue reading Superbubble's Final Act? Or Is This Time Different? at ZeroHedge.

A Message to the Republican Doomers
RedState October 4, 2022