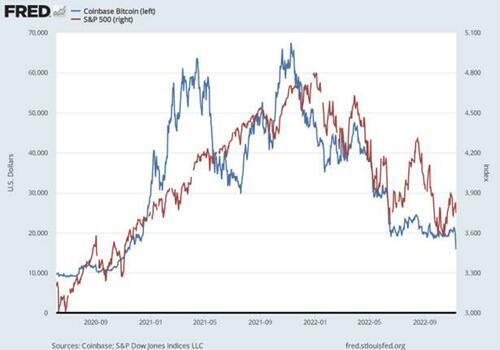 Authored by Matthew Piepenburg via GoldSwitzerland.com,

As the latest headlines from the FTX implosion remind us yet again of a politicized and rigged market riddled with deception, gold’s climb becomes easier to foresee.

But first, a little philosophical musing…

I have often referred to La Rochefoucauld’s maxim asserting the highest offices are rarely, if ever, held by the highest minds.

Nowhere has this been more apparent than among the halls of the physically impressive yet intellectually vacant Eccles Building on Constitution Ave in Washington DC, where a long string of Fed Chairs have been un-constitutionally distorting free market price discovery for over a century.

The media-ignored levels of open fraud and inflationary currency debasement which passes daily for monetary policy (namely monetizing trillions of sovereign debt with trillions of mouse-clicked Dollars) within the FOMC would be comical if not otherwise so tragic in its crippling ripple effect to the Main Street citizen.

From Greenspan to Powell, we have witnessed example after example of error after error and gaffe after gaffeon everything from mis-defining inflation narratives as “transitory” to re-defining a “recession” as non-recessionary.

And all this while the Fed (and its creative writing team at the BLS) simultaneously and deliberately fudges the math on everything from misreported CPI data to artificial U6 employment statistics.

Pondering the Philosophically Nobel Amidst the Administratively Dishonest

To any who have pondered the philosophical pathways (as well as elusive definition) of wisdom (from the ancient Greeks to the pre- and post-modern Europeans, romantic Emersonians, tortured Russians or enlightened Confucians), one common trait of wisdom through time, culture and language is the ability to admit, and then learn from, error–as any man’s journey is one riddled with countless opportunities for teachable error.

Yet when it comes to public mea-culpas and the grand teaching moments of “I was wrong,” it seems our central and commercial bankers have failed miserably.