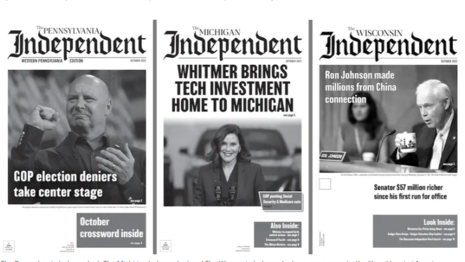 On their front page on Saturday, The Washington Post reported on the latest form of Democrat trickery: “Newspapers with a partisan aim filling the void of traditional media.” They’re right to call out this deceptive tactic of using the “trappings” of real newspapers to spread Democrat messaging.

Pennsylvania’s most widely circulated newspaper showed up, without fanfare or explanation, in the mailboxes of about 1 in every 5 households in the state this April.

A 12-page tabloid with a circulation of 953,000, it has arrived every month since, with articles from the Associated Press, crosswords, recipes and useful updates on which nearby towns had the lowest gas prices. But nowhere in its pages does it disclose its true mission.

The Pennsylvania Independent is, in fact, a new sort of political-journalism hybrid becoming more popular on the left — just one part of a quiet four-state, $28 million election year effort by the liberal-leaning American Independent Foundation and partner groups aimed at swaying voters in the midterm elections.

Only the articles offer a clue of the underlying intent: A piece in the October issue described the opposition to “any gun safety measures” by “New Jersey resident” Mehmet Oz, the Republican candidate for Senate in Pennsylvania. Other stories detailed President Biden’s domestic manufacturing initiative, Republican denials of the 2020 election results and a proposal for a national abortion ban by Sen. Lindsey O. Graham (R-S.C.).

The headline on The Pennsylvania Independent that was pictured was “GOP election deniers take center stage.” That’s indistinguishable from “traditional” liberal media. The big difference is the fake paper only has 12 pages. This could have described Jeff Bezos:

The Independent has quietly positioned itself on the edge of an emerging and controversial industry fueled by ideological donors who are looking to further political agendas with the trappings of old-fashioned journalism, down to the ornate Gothic nameplate fonts.

Scherer & Co. really seems to have no clue how funny this sounds! Stop reading before you pass out from the hilarity!

The projects have alarmed journalism educators, who worry that the newcomers deceive readers, undermine the reputations of existing journalistic brands, and fail, in some cases, to meet even the basic standards of the professions, like revealing conflicts of interest or seeking out multiple perspectives on contested issues. [!]

Peter Adams, the senior vice president at the News Literacy Project, a group that has partnered with The Washington Post on educational programs, says products like the Independent need to be called out.

“It is one thing if you have a political purpose and you are being upfront about that. It’s another if you are trying on the trappings of standards-based institutional local media that aspires to serve the public interest,” Adams said. “It is unethical. And it is clearly designed to co-opt the credibility of what we have always known as the press.”

The Post can’t imagine that the traditional press is co-opting its institutional credibility to spread Democrat messaging. Objectivity dies in darkness!