New York City Mayor Eric Adams said Sunday that the city is considering taking legal action against Texas over the busloads of migrants sent from the Lone Star State to the Big Apple.

“Our legal team is looking at legal challenges we could do with Texas,” the Democrat told CBS 2. “We believe there are some options we have, because when you involuntarily place someone on a bus, we believe that actually skates the law… We’re not leaving any stones unturned to make sure that New Yorkers are [not] being treated in an unfair way.”

Adams has also suggested the city may use cruise ships to house the thousands of migrants who have been entering homeless shelters in the city. He said former mayor Mike Bloomberg considered cruise ships as temporary housing to address homelessness but never followed through.

New York City Mayor Eric Adams is considering taking legal action against Texas over the busloads of illegal migrants being sent to the city.
(Nathan Posner/Anadolu Agency via Getty Images)

Since May, at least 11,000 migrants have entered the city’s homeless shelters, including 2,500 who arrived on buses sent by Texas. New York City has opened 23 emergency shelters and is expected to open an additional 38, Adams said.

In other TV interviews on Sunday, Adams called on Texas Republican Gov. Greg Abbott to at least notify the city about migrant buses being sent.

City Hall officials called Abbott’s office and asked to coordinate the arrival of buses to allow time to contact family members and sponsors of new arrivals and to prepare shelter space.

“They took the call, stated that they would coordinate,” he said on ABC’s “This Week.”

“And they did not coordinate at all, because I don’t think it was politically expedient for them to coordinate. It was more to do this, basically, political showmanship that you’re seeing,” Adams continued.

Abbott has said Texas will continue sending buses of migrants to sanctuary cities like New York City, Washington, D.C. and Chicago until the federal government secures the southern border.

Fox News’ Bill Melugin said a Department of Homeland Security source reported that the El Paso, Texas, sector experienced 1,967 illegal crossings with only 335 Title 42 expulsions during a 24-hour window from Saturday to Sunday. 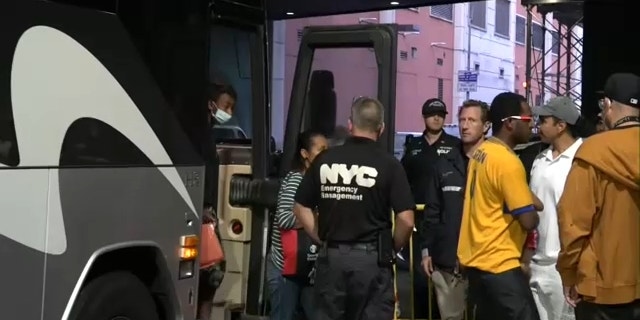 Adams said in two additional TV interviews on Sunday that Abbott and Florida GOP Gov. Ron DeSantis, who flew migrants to Martha’s Vineyard in Massachusetts, were relocating migrants as a distraction from their “erosions of basic human rights,” citing the Republicans’ stances on abortion and guns.

The offices of Abbott and Adams each did not respond to Fox News Digital’s requests for comment.