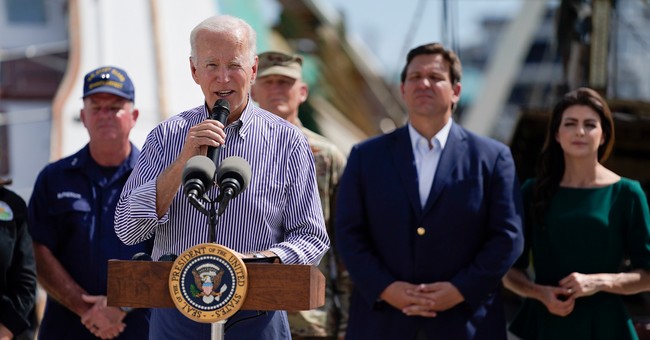 There were some memorable moments during Joe Biden’s remarks while visiting Florida on Wednesday to survey the damage from Hurricane Ian. But one of the most memorable had nothing to do with Biden and everything to do with DeSantis. DeSantis was also there and he spoke from the same podium, putting him behind the presidential seal. That looked like that was a foreshadowing of things to come.

Both Biden and DeSantis were very cordial to each other in their remarks. DeSantis thanked Biden for the help from the federal government. Biden spoke about this settling the discussion of “climate change” as DeSantis looked like he was doing all he could to hold his tongue about that comment in the background.

There were a few other comments from Biden that are raising some eyebrows as well.

Ron DeSantis has “recognized this thing called global warming,” Biden claimed. I seriously doubt that, not to mention that, of course, Biden is using a natural disaster and people dying to try to justify his political points. Sounds like he’s spreading a lot of malarkey about DeSantis with that comment. I suspect the comeback from DeSantis on that could be epic but he may decide just to focus on the hurricane response. But isn’t that just like Joe? Perhaps he should try just focusing on what he’s supposed to be there for — for the people who have been so adversely affected on the ground.

Biden did talk about the hurricane, but he also couldn’t resist slipping in a false story about his brush with disaster — when there was a fire in his kitchen.

Now, it was a significant fire that required the Fire Department, but it was confined to the kitchen and caused minimal damage, it did not result in him losing “an awful lot” of his house as he claimed. That’s pretty vile when you lie like that to identify with the people with whom you are talking, people who have lost “an awful lot” of their homes. But this is what he does all the time — he always makes it about himself.

But perhaps the Biden comment that sparked the most response was this one where he is talking to Fort Myers Beach Mayor Ray Murphy.

“By the way, you’re raised the same way I was, no one f*cks with a Biden,” Biden said. “Yeah, you’re goddamn right,” the mayor laughed.

Is he kidding? This is the guy who, for forty years, was a bit of a laughing stock in the Senate, known for his gaffes until the Democrats had to remake him to help their grab for power. This is the guy about whom Barack Obama reportedly said not to underestimate “Joe’s ability to f**k things up.” Biden has such a delusional sense of himself, perhaps because he’s had a coddled existence as a senator for so long, but he thinks that he’s something like a Mafia kingpin. This sounds more like language similar to Biden’s threat against the Ukrainian prosecutor. And again, why is he making this about himself, when it should be about Florida?

That naturally prompted many on Twitter to list the many times that people had in fact “f**ked” with Biden. Among the things people pointed to were OPEC cutting oil production after he begged them to increase it. Then there’s Vladimir Putin who Biden continually blames for inflation/gas prices without realizing that makes Biden sound weak when he pushes that lie. Not to mention the Taliban and Biden’s huge debacle in Afghanistan.