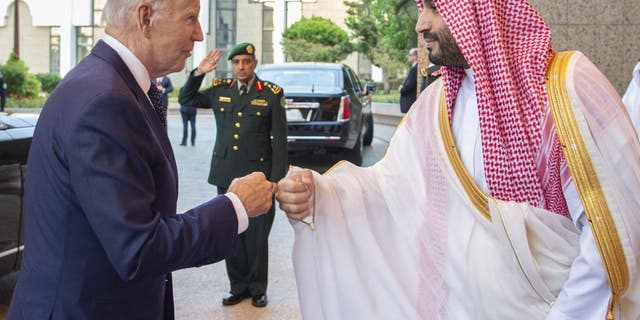 If President Joe Biden was looking for a gift for former President Jimmy Carter’s 98th birthday, his mishandling of the OPEC situation sure fits the bill. For all the current administration’s shortcomings and failures, they have been remarkably effective at waging war on America’s energy producers. Everyone in America is paying the price – literally – and suddenly the Carter years are looking better in retrospect.

The Biden administration may have expressed anger at the announcement from OPEC – a rogue’s gallery of 15 oil-producing countries that includes Russia, Iran, Saudi Arabia and Venezuela – that it was slashing oil production by 2 million barrels a day in November. But this was not an isolated incident. It was a long time in the making and exacerbated by Biden and his adherence to the green movement every step of the way.

As a candidate, Biden stated, “I guarantee you we’re going to end fossil fuels.” As president, he has made good on that promise, cancelling pipelines, leasing fewer acres of federal land for oil and gas drilling since World War II and showing nothing but disdain and outright hostility toward America’s domestic energy producers. Even before Hurricane Ian made landfall, Biden was wagging his finger at the private sector, issuing ominous warnings, “do not use this as an excuse to raise gasoline prices or gouge the American people.”

With domestic supply shrinking and demand accelerating post-pandemic, prices shot up and Biden’s approval numbers tanked. A gallon of gas, which averaged $2.39 on his inauguration, rose steadily, topping out at a nightmarish $5 per gallon over the summer. Today, the national average sits at $3.89 – more than a 60% increase from where it started.

As confidence in his presidency plummeted, Biden turned to foreign actors to bail him out. He traveled to Saudi Arabia in a futile effort to convince the crown prince Mohammed bin Salman, a man he once referred to as a “pariah,” to loosen supply. He eased restrictions on Venezuela, led by the brutal dictator Nicolas Maduro. His administration opened the door to buying oil from Iran. All the while, he continued vilifying American producers.

When none of those options panned out, Biden turned to the Strategic Petroleum Reserve (SPR). Much like “supply chain,” the SPR is not a familiar term to most Americans, and for good reason. As the word “reserve” indicates, the stockpile is an emergency supply. It was never intended for everyday use, but don’t tell the administration.

Starting last fall, Biden began flooding the market with oil. In the spring, the release accelerated to 1 million barrels per day over a six-month period, a period scheduled to last through the end of October. After OPEC’s announcement, Biden authorized the release of another 10 million barrels. Soaring gas prices is not a banner any politician wants to carry to the ballot box.

The SPR is at its lowest level in nearly four decades, leaving the United States vulnerable to unexpected supply shocks. Meanwhile, Biden is keeping the proverbial boot on the necks of domestic energy producers. In the aftermath of the OPEC news, his administration is reportedly preparing to reduce the amount of offshore drilling leases in the Gulf of Mexico. New York followed California’s lead in prohibiting the sale of gas-powered cars by 2035.

Biden repeatedly took credit for gas prices “going down” but now wants someone else to take the blame for their rise. Voters are smarter than the president gives them credit for.

For those hoping Biden will break from the greens, don’t hold your breath. His poll numbers are already sagging with young voters, a group he desperately needs to show up in November and who are especially animated by the green fantasy. According to NBC exit polls in 2020, nearly two-thirds of voters between the ages of 18-24 broke for Biden – 11 points higher than any other demographic.

In 1977, Carter discussed the “unconventional sources of energy we will rely on in the next century.” Nearly half a century later, Biden is continuing the reckless push to an all-renewable and untested future. Turns out bad ideas don’t get better over time. Misguided policies of both Carter and Biden created man-made energy crises that very well could link the men together in history as one-term presidents.