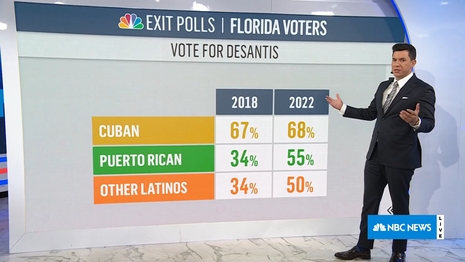 NBC senior national correspondent Tom Llamas said it best Tuesday night when he noted “Democrats would love these kind of numbers anywhere, specifically Florida,” in response to Florida Republican Governor Ron DeSantis winning a majority of Latinos in his runaway victory against Democrat Charlie Crist; a bright spot in what turned out to be wet blanket Election Day for Republicans.

As the clock was nearing midnight, NBC’s analysts were in awe of how the Republican Governor did with Latinos. “The Latino vote has been so interesting. We obviously have the results in from Florida, but Democrats cannot take the Latino for granted,” Today co-host Savannah Guthrie said.

NBC Nightly News weekend anchor Jose Diaz-Balart basically explained that Latinos were not a monolith. “I’m convinced that there is no Latino vote,” he said. “There are just Latino voters, and they vote differently depending on their sensitivity, their life experience, even where their parents and grandparents are from.”

He then gawked at DeSantis’s exit poll numbers among Latinos:

I’ve been talking – Chuck Todd, I think the story, there are 34.5 million Latinos eligible to vote in this election. 15 percent of the electorate is Latino. That is a massive amount of people. And I think that where it has been – and it’s an outlier no doubt, is Florida. The impact of Latino voters in Florida, DeSantis winning a majority of the Cuban vote, a majority of the Puerto Rican vote in that I-4 corridor. 55 percent of the Puerto Rican vote. 50 percent of all of the other Latino voters in the state of Florida. Miami-Dade.

NBC political director Chuck Todd was also amazed and recounted a conversation he had with an unnamed “Democratic consultant” who essentially admitted the party treats all black Americans the same:

You know Jose, I had a Democratic consultant say to me, “I’m tired. We’ve got to stop putting Latinos in a box and trying to treat them as African Americans, as if there is one issue that will somehow unite.” That Latino voters are just what Jose said, stop trying to single them out. Instead, whatever you are pitching swing voters, pitch that to Latino voters. That demographics and just like the same thing with how we carve up the white vote in those different buckets, that’s how you would – the Latino vote is no different.

HOLT: But is Florida now a solid red state?

HOLT: No longer a swing state.

A short time later, they went to Llamas for a breakdown of the exit poll numbers Diaz-Balart had mentioned and he commended Republicans for doing the groundwork and meeting Latinos where they are:

If Democrats want to learn why they are losing voters to the GOP, they should study the state of Florida. Yes, every group is different, it’s not monolithic, but Florida Republicans are doing something right. They are setting up a lot of different locations where they’re meeting Hispanic voters where they are. They’re on the air in English. They’re on the air in Spanish.

“And any assumptions the Democratic Party had about Latino voters, whether it be about immigration or abortion, they have to sort of get back to the drawing board, because they’re losing these important voters to their party pick is not just Florida. It’s places like Arizona and Texas as well,” he warned them.

3 Takeaways From Ron DeSantis’s Blowout Win For Every GOP Governor In America
The Federalist November 8, 2022