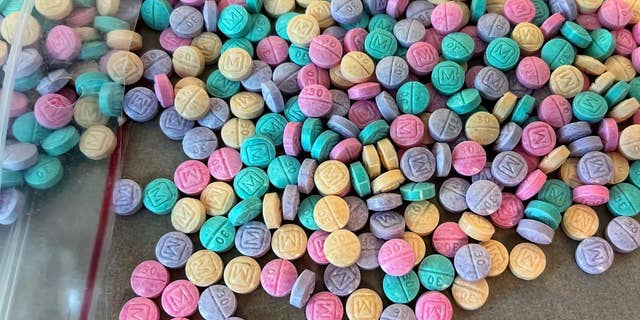 Halloween just got a lot more frightening this year. Forget the witches and ghosts, the real horror show might be found in your kids’ candy bags, due to an alarming increase of rainbow-colored fentanyl pills disguised as popular candy brands.

Remember when “tricks” meant cleaning up a smashed pumpkin or pulling toilet paper out of a tree at the end of the night? Now parents have to check Cinderella and Chewbacca’s Skittles for fentanyl. Good times.

Even Senate Majority Leader Chuck Schumer, D-N.Y., warned of the potential for rainbow fentanyl landing among your kids’ Halloween haul this year.

This growing trend brought to you by a president who inexplicably insists on leaving our border wide open and rolling out the red carpet for illegal immigrants and drug cartels who are preying on innocent children.

Nearly 5 million illegal immigrants have been welcomed into our country on President Biden’s watch – no questions asked – including 2.7 million just this year alone. This is the breeding ground for the fentanyl crisis that’s indiscriminately flooding our communities and making a grab for our kids.

Thanks to the Biden administration’s reckless and irresponsible policies, the fentanyl crisis has led to a community crisis that’s camped out in the backyards of Main Street USA. Main Street America did not sign up for border patrol duty.

Yet here we are, all towns are now border towns. And it’s no wonder, the U.S. Customs and Border Protection agency seized 14,700 pounds of fentanyl this year at the southern border, which is seven times more than just five years ago.

That’s a shocking increase. Except it’s not, when you consider the welcome mat this administration lays out at the southern border, while they take a siesta through the “single deadliest drug threat our nation has ever encountered.” Those aren’t my words, those are the words of U.S. Drug Enforcement Administration (DEA) Administrator Anne Milgram.

Barack Obama privately threw a warning shot to Democrats in 2020 when he said, “Don’t underestimate Joe’s ability to f— things up.” I’m not sure even Biden’s fiercest critics could’ve imagined just how fast that superpower would take effect.

Former first lady Nancy Reagan built an entire anti-drug campaign urging kids to “Just Say No” in the 1980s, but President Biden just says “Yes” to drug traffickers pouring over the border illegally and going after our kids.

As late as last month Vice President Kamala Harris insisted on “Meet the Press” that our border is, in fact, secure. Repeat that enough and maybe we’ll believe you. Just kidding, but still they persist because they really do think we’re low information voters.

Shortly after, White House press secretary Karine Jean-Pierre persevered through a rambling word salad to double down on the vice president’s comment and assures us that yes, our border is secure. Nothing to see here – so please don’t look. That’s their story, and they’re sticking to it.

Alarm bells are going off to an administration operating in closed caption. Time to turn up the volume, wake up from the siesta or do whatever it is they need to do to “Just Say No” – no to wide open borders with illegal immigrants and drug traffickers flooding across, coming for our kids. “Just Say No,” so we can take our communities back.