Biden and Trump help Warnock, Walker by staying out of Georgia

Voters in Georgia head to the polls on Tuesday in a crucial Senate runoff election that will determine if Democrats land a little bit of breathing room in their razor-thin control of the chamber’s majority.

But ahead of the election, there are no plans for either President Biden or former President Donald Trump to stump in-person in the key southeastern battleground state, another sign that the Democratic and Republican front-runners in the 2024 presidential race are both saddled with plenty of negatives.

“This race in Georgia… it’s really, really critical,” the president said on Friday as he hit the phones with fellow Democrats making calls to Peach State voters in support of Democratic Sen. Raphael Warnock, who’s facing off in the runoff election by GOP nominee Herschel Walker . “This is a guy who needs our help.”

But the phone bank the president visited was far from Georgia — It was in Boston, Massachusetts. President Joe Biden speaks to volunteers at an International Brotherhood of Electrical Workers (IBEW) phone banking event on December 2nd, 2022 in Boston, Massachusetts for re-election campaign of Democratic Sen. Raphael Warnock of Georgia. (Photo by Nathan Posner/Anadolu Agency via Getty Images)
(Nathan Posner/Anadolu Agency via Getty Images)

Biden also headlined a fundraiser for the Democratic Senatorial Campaign Committee while in Massachusetts. The Senate Democrats’ re-election arm has spent millions of dollars on behalf of Warnock as he seeks a full six-year term representing Georgia in the Senate.

The stops by Biden in Boston to boost Warnock were the final examples this year of the president’s strategy of supporting Democrats in tough races by helping them from a distance, which White House aides say contributed to the party beating of expectations in last month’s midterm elections.

Aides said the trip to Boston to help Warnock was requested by the Georgia senator’s campaign, and that Biden was happy to make the stop.

“The president is willing to help Senator Warnock any way he can, however the senator wants him to get involved,” White House press secretary Karine Jean-Pierre argued earlier this week.

And this cycle — that often means that the president stays far away from the campaign trail. By contrast, on the eve of Biden’s stop in Boston to help Warnock, former President Barack Obama teamed up with the senator — in person at a large rally in Atlanta — for the second time in five weeks.

Trump’s also staying away from Georgia.

Walker, a former college and professional football star, launched his Senate campaign in the summer of last year, after months of encouragement to run by the former president, his longtime friend. Trump held in-person rallies in Georgia for Walker in September 2021 and March of this year but has not returned to the Peach State to campaign in-person since Walker easily won the May Republican Senate primary.

But when asked by Fox News on Wednesday if it would be better for Trump not to appear with him in person, Walker quickly answered, “Not at all. I’ve invited President Trump whenever he wants to come.”

Trump last month launched his third campaign for president, and Biden’s repeatedly said he intends to seek a second term in the White House in 2024. But poll after poll indicates that many Americans are far from excited about a Biden-Trump rematch in the next presidential election.

FIRST ON FOX: PENCE HEADING BACK TO NEW HAMPSHIRE IN DECEMBER

There was plenty of other action this past week in the 2024 presidential race.

The Democratic National Committee took a major step to adopt the president’s proposed shakeup of the 2024 presidential nominating calendar, potentially removing Iowa and New Hampshire from their first spots.

The Iowa Caucuses display at the State Historical Museum of Iowa, on Jan. 15, 2020
(Fox News)

The DNC’s Rules and Bylaws Committee voted Friday to adopt Biden’s proposal to have South Carolina vote first on the Democrats’ nominating calendar in 2024, with New Hampshire and Nevada holding primaries a few days later in a move aimed at making the lead-off contest more representative of the party’s increased diversity in recent decades.

Term-limited Republican Gov. Larry Hogan marked eight years of steering the blue state of Maryland and looked towards a future that may include a 2024 GOP presidential run as he gathered with family, friends, supporters and donors from across the country for a trio of events on Wednesday. 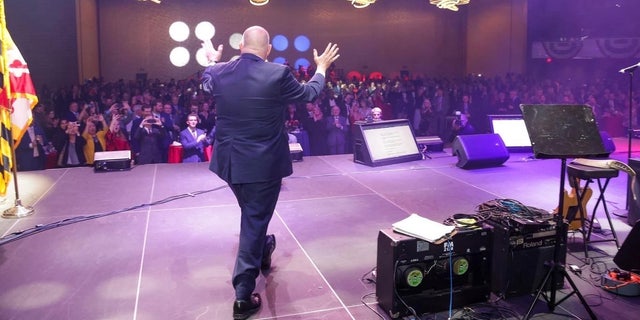 Term-limited Republican Gov. Larry Hogan takes to the stage at a celebration of his eight years steering the blue state of Maryland, at an event in Baltimore, Maryland on Nov. 30, 2022
(An America United)

Hogan took part in a leadership summit in Annapolis, Maryland’s capital city, and two celebratory events in nearby Baltimore that were hosted by An America United, the Hogan-aligned public advocacy group, and the Better Path Forward PAC, a recently launched federal political action committee.

One of the events drew roughly 1,700 people, according to organizers.

From the launch of the PAC to numerous visits this year to Iowa and New Hampshire – the states that kick off the Republican presidential nominating calendar — as he crisscrossed the country supporting fellow Republicans running in the 2022 elections — Hogan’s made many of the moves a politician makes in advance of launching a White House campaign.

“Early next year we’re going to be sitting down and figuring out what the future looks like, but I haven’t ruled anything out,” Hogan reiterated in an interview with Fox News Digital last month.

FIRST ON FOX: DESANTIS NEW BOOK COMING OUT IN FEBRUARY AMID 2024 SPECULATION

Republican Gov. Ron DeSantis of Florida will chronicle his life in public service in a new book that will publish in late February in what will be seen by political pundits as another step by the conservative champion toward a possible 2024 presidential run.

The autobiography by DeSantis, who was overwhelmingly re-elected three weeks ago to a second four-year term steering the increasingly red Sunshine State, is titled “The Courage to Be Free: Florida’s Blueprint for America’s Revival.”

Word of the book, scheduled to be published Feb. 28 by Broadside, the conservative arm of HarperCollins Publishing, was shared first with Fox News Wednesday.

DeSantis for over a year has routinely discounted talk of a 2024 White House run as he stayed focused on his gubernatorial re-election. But he’s become a major force in the GOP as he’s built a political brand that stretches from coast to coast, and political prognosticators view him as a potential presidential contender.

Writing a book is a rite of passage for many potential and actual presidential candidates. Former Vice President Mike Pence, who’s likely to launch a White House run, is on a nationwide book tour for his new autobiography, “So Help Me God.”

“Never Give an Inch: Fighting for the America I Love,” a new memoir written by former Secretary of State Mike Pompeo, another likely Republican presidential contender, is scheduled to publish in late January.

And Sen. Marco Rubio of Florida, a 2016 Republican presidential candidate who hasn’t ruled out a future White House run, is expected to come out in June with his third book, titled “Decades of Decadence.”

Paul Steinhauser is a politics reporter based in New Hampshire.

The US continues to teeter on the brink of economic turmoil
Washington Examiner December 4, 2022